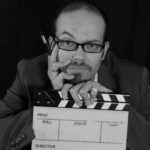 Alex Garcia Topete is a writer and filmmaker with more than 15 years of experience working in the creative industries in Mexico and the United States, having worked as transnational line producer for the award-winning film Te Prometo Anarquía (2015), as series development consultant for Sony Pictures Television International (2010), as executive producer for shows on National Public Radio’s digital platform (2010), and as writer-director of nationally-broadcast sketch shows for Mexico’s Televisa del Golfo (2006-2007), among others. He has been the managing partner and chief creative officer of the Dallas-based media production company Nowadays Orange Productions since its establishment in 2011. He has written, directed, and produced several projects, including the independent features Trippers (2010) and Vamps, Blood & Smoking Guns (2012), as well as the award-winning independent sitcom The Realty (2019-), the edutainment web series HablandoTV (2015-) and the Lone Star Emmy-winning docu-series Our Americas (2016-). In addition, Alex has been a curator/programmer since 2007 for several film festivals, including the Dallas International Film Festival and the Festival de Cine Latino Americano of North Texas (FDCLA), of which he’s an original co-founder.

Alex is also a researcher and entrepreneur with a doctorate in Arts, Technology and Emerging Communications and a master’s degree in Innovation & Entrepreneurship from the University of Texas at Dallas. His research and expertise focus on transdisciplinary intelligence & collaboration methodologies, particularly as they relate to the creative industries and their relationship to technology, value creation ecosystems, diverse publics, and social impact.